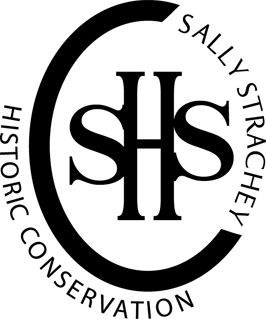 St Patrick’s Church is a Listed Grade II* Roman Catholic Church situated in Soho Square, in the London Borough of Westminster. The cleaning of the Church, carried out by SSHC, took place between January 2020 and February 2021.

The Church was built in 1891-93 by John Kelly of Kelly and Birchall in Renaissance style and is built from small-gauge dark red brick with rubbed brick detail. It was this exterior brickwork that that the Sally Strachey Historic Conservation team were tasked with bringing back to its former glory.

All in all, the building itself comprises of the west campanile tower, vestibule, antechapel, aisled nave, apsidal sanctuary and south chapel.

This major contract covered both interior and exterior works to the church. As Main Contractor SSHC had not only their own team on site but also managed a number of other subcontractors undertaking different trades.

The exterior brickwork was suffering from the general grime from being situated in a central London location including sooty deposits as a result of pollution.

The busy central London location of the site meant that the management of the project had to be meticulous in order to stay on schedule.

The external cleaning of the brickwork was completed by the SSHC team of experienced conservators using the ThermaTech super-heated cleaning system supplied by Restorative Techniques. This method and use of this system is very effective in the cleaning of historic buildings when the task requires a sensitive approach resulting in the protection of the original surface of the brickwork.

The cleaning of St Patrick’s Church, carried out by the SSHC team using the ThermaTech system, was highly successful. The results are displayed in the images below.

CCW Cleaning of the West Porches of St. Albans Abbey