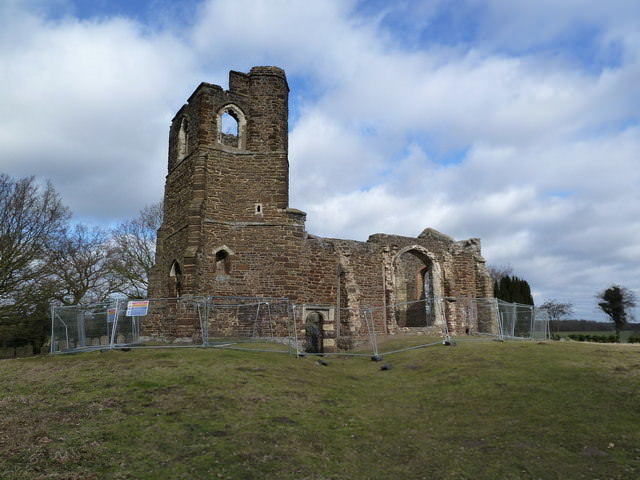 Finding the right tools to clean a 14th century church and expunge its devil worshiping past: all in a day's work for Restorative Techniques!

An old church in Clophill (Bedfordshire) dating from about 1350 was as a place for devil worship since the 1960s. The whole thing started when some students cut up a dead cockerel in the 1960s as a prank. By then, the old church had been deserted in favour for its newer Victorian successor and had become rather dilapidated and haunted-looking. Its brief spell as a mortuary chapel in the 1950s also contributed to its spooky atmosphere... After the cockerel beheading, speculations of devil worship started to gather momentum in the local press and keen devil worshippers flocked to the area. This eventually escalated to grave desecration and Satanic graffiti announcing the Gates of Hell appearing on the church walls...

It was certainly a hell of a job getting the graffiti off – although not as bad as it might have been! What made the walls easier to clean was the organic growth that had colonised the stone before the graffiti was daubed on it.

Restorative Techniques worked with English Heritage to find the best way of removing the graffiti from the walls after it had been decided in 2012 that the building should be cleaned up and made safe for people to climb the tower and admire the surrounding landscape.

The cleaning was carried out by Sean Brennan of the masonry cleaning company SMB Restoration with Jamie Fairchild from Restorative Techniques carrying out tests for the removal of the graffiti and propose potential solutions. Initial tests revealed that the geometric patterns (consecration marks) underneath the graffiti had been given a colour wash when they were originally made, which excited the conservationists.

Various mechanical and chemical cleaning solutions were tested in inconspicuous areas of the walls and the system chosen for most of the project was our gentle abrasive cleaning system VorTech. VorTech can be fine tuned by the operator, so the graffiti can be removed without damaging the substrate.

Restorative Techniques’ ThermaTech superheated water pressure cleaner was also tested; with water temperatures at 150ºC it sterilises as it cleans. In many cases this can be an advantage as it removes unwanted biological growth. But at Clophill the biological growth had created a film over the stone that made cleaning the stonework easier than had been expected. Jamie: “It would have been difficult to predict that. It was the trials that made it apparent”.

After the walls had been cleaned, English Heritage commissioned the treatment of the church walls with a microcrystaline wax, as an antigraffiti treatment. It has minimal impact on the look of the stone and will protect the walls from further graffiti attacks; importantly for historic fabric it is is sacrificial and fully reversible. It does not seal the stone, so will allow biological growth to recolonise the stonework and once again create a natural film to make it easier to remove any future graffiti: safeguarding the church from future daubings.

Because most of the graffiti at Clophill was paint, some people might have first turned to a paint softener as an initial reaction to the problem. But paint softener would have removed the 14th century colour wash over the consecration mark,  and in any case was shown to be unnecessary by the trials.

Old paint is often lead-based and even asbestos has now been found added to all kinds of building materials, including mortars. Cleaning such materials might require ThermaVac, which is the optional vacuum recovery module that works with a standard ThermaTech. ThermaVac recovers waste, even at the top end hot temperatures, and automatically periodically discharges into a container (such as an intermediate bulk container or IBC) for subsequent safe disposal- great for dangerous chemicals.

The constituents of materials always determine which are the best systems for removing it. Organically-bound acrylic and linseed oil-based paints are easily removed using the superheated water ThermaTech system or VorTech. But these mechanical systems don't work so well on non-organically bound paints.

“Just knowing what the coating is made of is half the battle,” says Jamie, highlighting the importance of matching the right tools to the right job.

This news article was first featured in Stone Specialist