Celebrating the Queen's 90th with the cleaning of Westbury White Horse 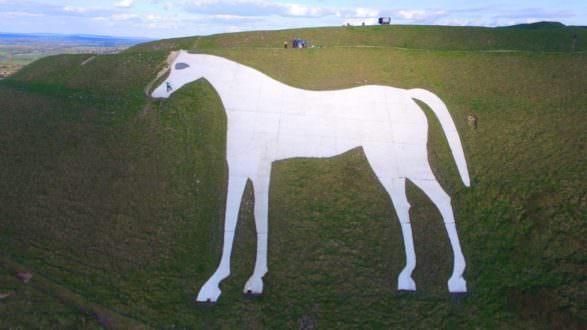 We were thrilled to be part of the Queen's special birthday celebrations this April as the ThermaTech® as taken up to the Westbury White Horse to give it a thorough clean for the Queen. Led by Steve Carrington from the local Rotary club and supported by enthusiastic local volunteers, we even managed to capture some drone footage of the cleaning thanks to Ocuair.

RETURNING TO A MUCH-LOVED LANDMARK

The Westbury White Horse is a unique national landmark, and we were excited to return on-site after having already helped clean the horse back in 2012 (read all about it on our blog). The history of the White Horse stretches all the way back to ancient Saxon times, so it seemed like the perfect way to commemorate 90 years of Queen Elizabeth II's rule. On Thursday 21st April at 7.30pm, the evening of the Queen’s actual 90th birthday, the newly-cleaned Horse was lit by beacons, lighting up the Horse and the surrounding landscape in celebration. Beacons were once part of an ancient signalling system used throughout Britain to warn rulers and residents of danger, making the beacon a fitting token of appreciation.

Here are some facts about the Horse's history:

Technically no longer a carving, the White Horse is now a concrete horse painted over in white, needing regular cleans to maintain its shine in Wiltshire's wet conditions. The Horse particularly needs periodic maintenance and cleaning to stop it from turning grey from weathering, algae and lichen. Thankfully local residents are always ready to do their bit for the Horse, happily stepping into the breach in April, as they had done for the previous clean during the Diamond Jubilee back in 2012.

HORSING ABOUT IN MID-AIR

Cleaning the Horse can definitely be compared to abseiling and it attracts some daredevil volunteers. In fact, upwards of 20 local volunteers spent two days in April steam-cleaning the 175 foot landmark with the help of cables and safety harnesses. Quoted in the Horse & Hound, Steve Carrington praises the volunteers' enthusiasm “It was a herculean effort on the part of all the volunteers". It's great to see the ThermaTech® being used on such a special occasion, and we were thrilled to be involved in this landmark restoration project again.

WHITE HORSE FEATURED IN THE PRESS

An event of this scale and importance naturally attracted quite a bit of press attention: